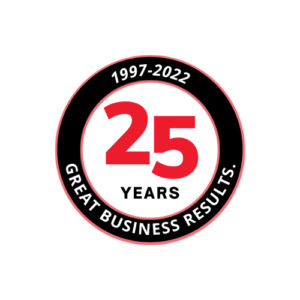 Just Solutions, Inc. (JSI) is celebrating its 25th year in business. In 1997, Tracy and I founded the business out of our home in Fairport. I thought it might be fun to look at facts and news from 1997 versus where we are today.

What other businesses started in 1997 that are around today? Well, “Google.com” was registered as a domain name that year. There were only about 100,000 websites at the time. Clients asked me “why would we want to have an email address?” Sadly, companies like Media Play, KB Toys, Sam Goody, Sharper Image are all gone today. Netflix was founded along with Priceline.com, Overstock.com, Viking Cruises to name a few. Woolworth’s closed their last store after 100 years.

Broadband was being invented and most people were using dial-up Internet connections ranging from 28.8Kbps to 33.6Kbps. 56K modems were just arriving in stores. The cost of a new PC from Compaq and Hewlett-Packard dropped below $1,000 for the first time. Time Magazine’s “Man of the Year” was Andrew Grove, a Hungarian-American who was a pioneer in the semiconductor industry. If you don’t remember that name, Andrew Grove was the CEO of Intel.

When Tracy and I were deciding on a name for our business, we liked the idea of “solution” selling. Our son, Justin, was only 6 at time. We had already picked a name for our daughter. She wasn’t born yet but Tracy was pregnant at the time, and we had picked out her name, Sarah. So, our name was easy to come up with at that moment – “Just Solutions”.  Tracy told me I had a year to get the business going or I had to get a “real job”.  Well, I still don’t have a “real job”, but Just Solutions is going strong. We would like to thank all of our current and former employees, customers and friends that have helped us grow into the number one IT company in Rochester.

“Business solutions for the unfortunate 1 million, not the Fortune 1000.”

Join us April 28th at Iron Smoke Distillery to celebrate our 25th anniversary! For more information and to register, click here! 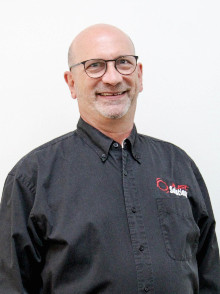 As the Vice President, David Wolf is a technology visionary and serial entrepreneur with over 30 years of experience in the IT industry. David has achieved the highest industry security certifications of CISSP (Certified Information Systems Security Professional), CEH (Certified Ethical Hacker), and CCISO (Certified Chief Information Security Officer). He enjoys using his technical expertise to help fellow business owners get the most out of their IT.